If you are using a CMS earlier than v3.0.0 please use the following link: Command Functionality

The Command Functionality in Xibo can be used to configure a set of Commands that a User can select to execute via XMR, in a Schedule or include in a Layout.

Commands can have Command Strings to apply to all Players or have a different Command String per Player which is particularly useful if the network of Players is mixed, connected to different Displays or have slightly different Player hardware.

A Command record is created with a Name, internal Reference and unique Command Code, which allows for a “generic command” to be created which can be used across Display Profiles, Scheduled Events and the Shell Command Widget.

Commands are created and managed by navigating to Commands under the Displays section of the main menu:

Click on the Add Command button at the top of the Commands Grid: 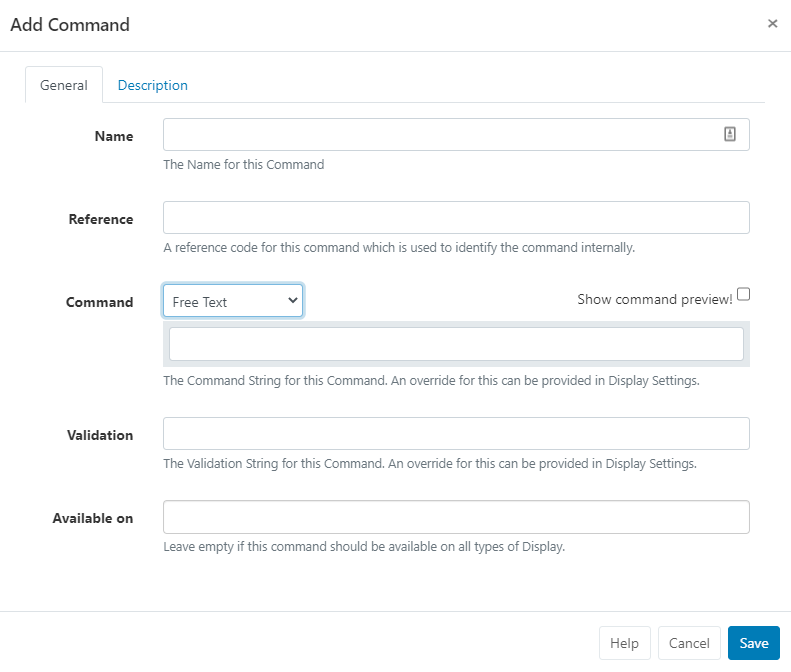 Use the drop down to select from the following options and complete the presented fields:

The Validation String is used as a comparison to the Command output and if it matches then the Command is considered a success. This string can be a regular expression.

This could be useful for a network of mixed Windows and Android Players with a command called ‘Reboot’. The Command String for ‘Reboot’ on Windows being shutdown /r /t 0, and on Android, it is reboot.

The same can also be useful with a non-mixed network - imagine a network of Windows players with different monitors connected over HDMI/RS232. A single Command called ‘Monitor On’ can be created with the different brands of monitor represented by different Display Settings Profiles, each can have a different Command String to turn the monitor on/off.

Command and Validation strings can be overridden using Display Profiles. Click to Edit and use the Command tab!

Commands can be executed via XMR from Display/Display Groups using the Row Menu:

Commands can be Scheduled to execute on a specific date/time by using the Schedule Page.: 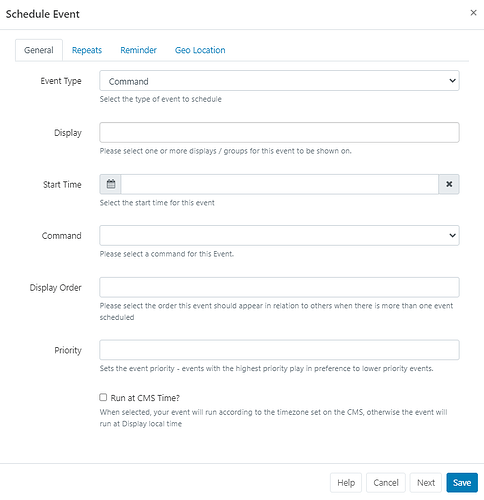 Scheduled commands are executed once on the Player and only require a Start date and time. The Command can be executed up to 10 seconds after the time selected.

The Shell Command Widget is used to run external Commands based on the Layouts activity.

Commands can be selected by adding the Shell Command Widget to a Layout. Shell Commands with a Command as their source act in the same fashion as normal shell commands. The Command is executed when the Widget is shown on the Layout.

They should be used in a Region on their own so they are executed only once each time the Layout is shown.

A Shell Command can also be a Command String with options for all Players provided. This allows Users to add Commands ‘ad-hoc’ for one-time use. We recommend that Administrators create predefined commands where possible.

Command Helpers are prefixes that can be added to the Command String in order to take a more advanced action. Commands without a prefix are executed in the shell of the operating system which runs the Player. cmd.exe on Windows and shell on Android.

RS232 commands can be executed on Players by using the rs232 prefix in the Command String. The format of the command is rs232|<connection string>|<command>.

The connection string should be provided in the following format on Windows:

The connection string should be provided in the following format on Android:

Each setting is represented by a corresponding number:

The Command itself is a string which gets sent over RS232 using the connection details.

Android display profiles can use the intent helper to specify an intent that should be called when the Command executes. The format of the Command is intent|<type|activity,service,broadcast>|<activity>|[<extras>] .

[<extras>] is an optional parameter available from Xibo for Android v2 R206 used to provide additional data to the Intent. This must be a JSON formatted string containing an array with at least one object. The object format is below and must be on one line.

For example, on some devices you can program the firmware to set on/off times.

This would be set on the command as:

Commands containing an intent helper are ignored in the Windows Player.

HDMI-CEC is a bus that is implemented on nearly all new large-screen TVs that have HDMI connectors. This bus (which is physically connected within normal HDMI cables) supports control signals that can perform power-on, power off, volume adjusts, selection of video source and many of the features that are accessible via the TV’s remote control. It can also control most other hardware on the HDMI bus.

Xibo doesn’t provide a direct interface to HDMI-CEC as there are many different manufacturer specifications, however, it is possible to control HDMI-CEC via a batch file.

Industry grade monitors often have a serial interface for turning the monitor panel on and off. Xibo can use the RS232 Command helper to send these Commands to the monitor - usually in HEX mode.

The following monitors and Commands have been tested:

It should be noted that other models of each brand should also use the same Commands.

Phillips integration is available from Xibo for Android v2 R200.

The following commands can be used to control LED’s located on the sides of some commercial Phillips Displays:

From Xibo for Android v2 R215, integration has been added to power on/off the screen backlight by using the following commands:

The below commands can be used for one specific Android 4 model only; 2016 model 10BDL3051T

screenoff will turn the screen off and put in a lower power state which can then be turned back on with screenon.

For all other models, please use backlighton/off as screenoff will power completely off resulting in the need for an on site restart!

Mute/unmute commands have also been added from v2 R215:

Please note: backlighton/off doesn’t mute audio, so if you have audio playing you will will also want to schedule the above mute/unmute commands at the same time.